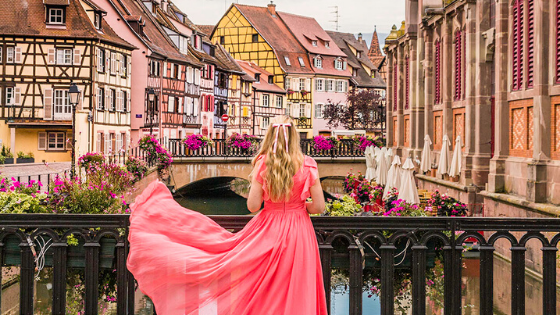 Well known for its colorful houses, Colmar is a French city that deserves a visit. It’s located in East of France, in the region of Alsace at the border of Germany. Would it be in December for the Christmas market or at any other time of the year (some of my photos were taken in summer), this town is a dream! I have made here the list of the best Instagram spots in Colmar. You will see that wandering in Colmar is like stepping into a fairy tale!

My father was born and raised in the Alsace region. I always love to visit here therefore I took a lot of pleasure to write this guide for you!

Disclosure: *This post contains a few affiliate links, which means I may receive a small commission, at no cost to you, if you make a purchase through my link. Thank you!*

Where and when to take pictures in Colmar?

Where to take pictures in Colmar?

First and foremost you have to know that Colmar is not a village: it’s the third largest commune in the Alsace region after Strasbourg and Mulhouse. So the city might be bigger than what you expected! Most of the best Instagram spots in Colmar are located in the Old Town, around an area called “La Petite Venise”. La Petite Venise or Little Venice is the name given to the course of the Lauch River in Colmar. This name probably came from the original line of the houses on both sides of the river, which serves the southeast of the city.

When to take pictures in Colmar?

Colmar is a very touristy city, so the earlier in the morning you go to those best Instagram spots, the better! It is more crowded during the weekends and during the Christmas period.

This lovely timbered house is THE most famous spot in Colmar because it’s often decorated! For the Holiday the house is covered with beautiful Christmas decorations and there is a Christmas tree in front of it! You have to capture it for your Instagram! In my summer photo, the decoration was promoting the famous cycle tour Tour de France happening every summer in the country.

Location: at the crossroads of the Grand’Rue and the Place de l’Ancienne Douane.

Close to the Marché Couvert (Covered Market) in the street named Rue des tanneurs you will find a bridge with a very nice view of the Lauch River and the colorful houses of the area. This is one of the best Instagram spots in Colmar because you can capture both the river and the half-timbered houses!

If you want you can buy some fresh products at the covered market (fruits and vegetables, meat, fish, cheese, bread and pastries…). It’s open every day except on Mondays.

Quai de la poissonnerie is a street full of pretty colorful half-timbered houses. If you pass the Bridge rue des tanneurs (mentioned before) having the covered market in your back you will be in this street.

Some interesting houses in the street that are part of the best Instagram spots:

Accommodation info: Would you like to stay in this house? Sounds good right?! Well, you can actually rent an apartment here: Les Appartements de Home Petite Venise.

On the other side of the Marché Couvert (Covered Market), in the street named Rue des écoles, you will find a second bridge offering a very instagrammable view of the Lauch River and the pretty houses of the Quai de la poissonnerie. Both sides of the bridge are photogenic!

This souvenir shop named “Au Vieux Pignon” is decorated all year long and they change the ornaments every season. You can admire here the summer version with huge flowers and cute hearts on the windows. In winter you can see some penguins, polar bears and gift boxes! It’s very instagrammable for sure!

This bridge over the Lauch River is named Pont St Pierre. I could stare at this view for hours: it looks so magical! Of course this had to be part of my best Instagram spots in Colmar!

From this spot you can take a flat-bottomed boat and go on a boat trip on the Lauch River. You will discover Colmar from another angle! More info here: https://www.barques-colmar.fr/en/ . It costs 6 euros per person and the guided boat tour lasts 25 min.

The restaurant Brasserie des Tanneurs has a very pretty storefront that you might want to capture for Instagram. The interior is also very cute with the wooden traditional decor! It’s very popular among tourists so if you want to eat here, better book in advance or arrive early.

Which other towns to visit in Alsace?

Colmar is not the only beautiful city in Alsace! You will find colorful half-timbered houses in many places. Here is a list of the cities and villages you should visit:

What else to do in Alsace?

I highly recommend you to visit the Alsace region in France and stay for a few days as it has a lot to offer:

I hope I convinced you to book a trip here!! I promise you will love it!

You should also take a look at this article if you are considering visiting here during Christmas season: A magical Christmas getaway in Alsace.

If you are looking for more recommendations of places to visit in France, I many many articles for you here: Travel in France. 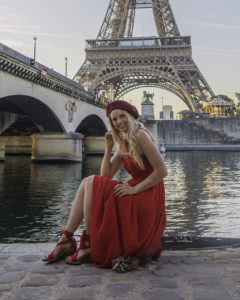 Moody vibes at the Sacre Coeur 💒 Do you why th

The stunning entrance of the Louvre 💎 The pyra

Sunrise at Notre Dame 🌅 This sunrise from last

Cute carousel at the Hôtel de Ville 🎠 One of

Wandering in rue de l’Université 🗼 I had to

Princess at the Louvre Museum 💃 I can’t beli