The Most Instagrammable Places in Montmartre 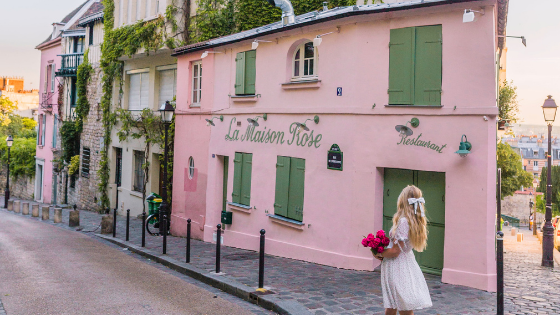 19 Nov The Most Instagrammable Places in Montmartre

Montmartre is a lovely district of Paris perched on the top of a hill in the 18th arrondissement. This neighborhood looks like a village within the capital city. It’s one of the most charming areas of Paris and it’s full of photogenic corners! I am sharing with you here the Most Instagrammable Places in Montmartre. In this article I will give you all the best places to take photos in Montmartre!

Montmartre actually used to be a village and got annexed to Paris only in 1860. In the 19th and 20th century many artists used to live and work here, because the rents where low and the ambiance was convivial. Painters like Pierre-Auguste Renoir, Maurice Utrillo, Raoul Dufy, Pablo Picasso or Amedeo Modigliani, and composers and other artists like Erik Satie, Josephine Baker, Le Corbusier or Django Reinhardt enjoyed this unique area.

The best way to discover Montmartre is to get lost in the streets, and to walk up and down the numerous stairs in the area. You will see that it’s very easy to get to one spot to another. So, without any further ado, follow me in the streets of Montmartre and discover the Most Instagrammable Places in Montmartre!

La Maison Rose is one of the most iconic spots of Montmartre! This cute restaurant with pink walls and green shutters will seduce you for sure! The facades of the villa surrounding it are covered with ivy. It’s absolutely charming and providing a nice change of colors throughout the seasons! That’s why it’s one of the most instagrammable places in Montmartre.

This pink house was built in the 1850’s and it used to be frequented by many painters. One of the paintings of Maurice Utrillo “La Petite Maison Rose” made it world famous in 1900!

My secret tip: I recommend taking pictures here early morning if you want to pose in front of it. The lady owning the restaurant do not appreciate people taking photos and might not be very kind to you if she catches you doing it! Many of my friends got yelled at…

The Sacré-Coeur is a stunning basilica dedicated to the Sacred Heart of Jesus. Located at the summit of the butte Montmartre, the Sacré-Coeur is in fact the highest point in Paris and you can see it from afar!

Its architecture is quite unique, with white stones and mixing Ancient Roman architecture and Byzantine architecture! It was built between 1875 and 1914.

It’s the second most visited monument in Paris after Notre-Dame.

My secret tip: You can capture it from many angles, it will always look stunning! For sure it’s one of the best places to take photos in Montmartre!

The Square Louise Michel is a green garden located right in front of the Sacré-Coeur. Here a double staircase with 222 steps leads directly to the basilica. From here you not only have a nice perspective of the Sacré-Coeur Basilica. But you also have a fabulous view over Paris: one of the most instagrammable places in Montmartre!

My secret tip: If you do not want to climb the steep stairs, you can use one of the gently sloping paths running alongside the gardens. Anyway it’s still quite exhausting to go up!

On Place St Pierre, the square in front of the Square Louise Michel, you will find a cute vintage carousel! You can take a picture of it with the Sacré-Coeur in the background! It’s really photogenic and that’s why it has to be part of the most instagrammable places in Montmartre!

Le Consulat is a typical French bistro located in rue Norvins, one of the busiest streets of Montmartre. Its traditional façade is very recognizable and quite picturesque. Therefore, this place is quite popular and one of the best photo spots in Montmartre!

My secret tip: If you want to take a photo without too much crowd or get a table at the terrace it’s better to come in the morning during the week.

The Metro station Lamarck-Caulaincourt is one of the best metro stations to access Montmartre. It’s quite famous amongst photographers because of the two staircases ascending the hill of Montmartre surrounding the entry. In fact the top of the staircase offers a unique perspective! I also love the vintage metro sign and lamp post in front of the entry: all good reasons why this is one of the most instagrammable places in Montmartre!

My secret tip: the platforms of the metro are 25 meters (82 ft) below the entrance. You can reach the exit by lift or by a spiral staircase. As there are 92 steps to climb, I highly recommend taking the lift!

In front of the metro station Lamarck-Caulaincourt there is a traditional French restaurant named le Refuge. This typical bistro with a red façade and a terrace looks very Parisian. And it makes a great photo spot in Montmartre!

My secret tip: come here in the morning if you do not want to have too many people sitting at the terrace.

Rue de l’Abreuvoir is one of the prettiest streets of Montmartre, hence one of the most instagrammable places! This is the street where you can find the famous Maison Rose restaurant. But it’s also bordered with other beautiful houses! You will find it very charming for sure: this is the kind of place that can make you forget that you are in Paris!

My secret tip: come here in fall, as many houses are covered with ivy the colors are fantastic!

What I call the “Ivy House” is the house located at the crossroads of Rue de l’Abreuvoir and Rue des Saules in Montmartre. It’s right close by the famous restaurant La Maison Rose. Because its façade is covered with ivy, it’s one of the prettiest houses of Paris! As a result this is one of the best photo spots in Montmartre. But this is a private property, so of course respect the inhabitants.

My secret tip: it’s even more photogenic during fall season!

Not far from the Maison Rose Restaurant you will find a lovely house with blue doors and a façade covered with ivy! It’s a less famous spot but it’s really pretty! Nevertheless it’s a private property, so of course respect the inhabitants.

My secret tip: it’s even more photogenic during fall season!

Au Lapin Agile (the Nimble Rabbit) is the oldest bar-cabaret in Montmartre! It already existed in 1860 when Montmartre became part of Paris. And in the early 20th century, the Lapin Agile became a favorite spot for struggling artists and writers, including Picasso, Modigliani, Apollinaire, and Utrillo! Actually Pablo Picasso’s 1905 oil painting, Au Lapin Agile (“At the Lapin Agile”) helped to make this cabaret world-famous!

My secret tip: You can see some music and poetry shows there, make sure to book in advance.

If you wander around Montmartre in autumn, you shouldn’t miss this beautiful wall. Covered with ivy, it takes the most incredible colors in fall season and has become very iconic! This is the Parisian wall captured the most in fall in Paris and one of the most instagrammable places in Montmartre at this time of the year!

My secret tip: Depending on the moment you go there you will see it from green to red, passing by yellow and orange: a nice fall rainbow!

Because Montmartre is located on a hill, there are a lot of staircases in the area! Although they are not the easiest to walk up (or down), they are very picturesque and offer great photo spots in Montmartre! In total there are 38 staircases surrounding the hill. They are really part of the charm of Montmartre.

My secret tip: one of the best moments to take photos in the stairs is at sunrise.

What we call the Sinking House is in fact the coolest optical illusion of Paris! This house is located right next to the Sacré-Coeur. Check the band of grass on your right-hand side when you walk up the final steps to get to the basilica: the building will be right in front of you!

My secret tip: to get the sinking effect, tilt your picture to the left to have the band of grass at the horizontal level! This cool trick is the reason why it’s one of the most instagrammable places in Montmartre.

Address: 2 Rue Lamarck, 75018 Paris (this is the address of the building but the best spot to take the photo is explained above).

The little park Marcel Bleustein Blanchet is located right behind the Sacré-Coeur and offers a very nice perspective of the basilica. You will find there a shady arbor with benches. You will love the scenic views of the Sacré-Coeur from here, the reason why it’s one of the most instagrammable places in Montmartre!

My secret tip: the arbor is covered with wisteria and take the prettiest colors in spring and in fall!

Rue du Chevalier de la barre is a street leading to the Sacré-Cœur. Because of its ideal location it offers a very nice perspective of the basilica! Therefore it’s a great photo spot in Montmartre.

My secret tip: this street is quite touristy so better to go there early in the morning if you want to have it to yourself.

There is a vintage photo booth in Montmartre! This is one of the coolest ways to create memories in Paris! If you want to have fun and get your own series of black and white pictures, you know where to go!

My secret tip: it costs 3 euros for a series of 4 photos and you have to wait 4 minutes to get them!

The Chambers of Secrets

Did you know the entrance of the Chambers of Secret was in Montmartre? If you are a fan of Harry Potter you will for sure want to have a look for this mural! It was created by the street art agency WYVI (Urban Culture Agency) in 2020. And it will for sure become one of the most instagrammable places in Montmartre!

My secret tip: the mural is on the left wall close to entrance of the Hotel Becquerel in the step street.

How to get to Montmartre

Here are the different metro stations to reach Montmartre:

You can also come with a taxi or Uber. But if you are driving a car you might have some difficulties to park, as there are not so many parking spots available.

I hope you will enjoy strolling in these pretty streets to chase the Most Instagrammable Places in Montmartre! What is your favorite one?

Do not hesitate to ask me if you have any questions!

Maybe you are looking for romantic spots in Paris? Find them all by clicking on the link.

All my tips about Paris: the best photography spots and best places to eat are in my Paris section, take a look!

Last but not least if you want to get some gorgeous pictures of you, you can hire me for a Photoshoot in Paris! And I am also offering my foodie services as your Food Concierge in Paris!

Intense sunset at Pont Alexandre III 🔥 I was c

Fall vibes at the Eiffel Tower 🗼 I will always

Quiet Morning at the Louvre Museum 💗 I love th

Pretty corners in Paris 😍 Who is missing Paris

Memories of a dreamy sunset over the Seine 🌅 S

Pretty Parisian door 🚪 Do you know this Paris

Postcard from Montmartre 💗 I just published a